Shorting Apple against the market

In June 2010 I suggested a pair trading experiment: Apple short vs Google long. It wouldn't have given positive results.

As for today, the short position on Apple would return -31%, while going long Google would give +25%. Hence the net would be -6%.

I'm going back to this idea, since Apple's market capitalization has exceeded Exxon's just yesterday:

Source: Meet America's New Largest Publicly Traded Company (If Only For A Few Minutes),
Zero Hedge, 2011-08-09
I think I've made a crucial mistake in my assumptions of the above mentioned experiment. I thought Google would continue bringing innovative solutions that would instigate interest in the company from both users and investors. Unfortunately, except for the launch of Google+ (which outlook is still uncertain, taking into account its defensive nature against Facebook), Google did not bring any significant products to the market in the analyzed period.
Yes, the Google's recent financial results were pretty impressive. But Apple delivered both strong financial results AND hype-prone products. The launch of iPhone 5 is expected for September and this should support the Apple stock price. Especially relatively to the market.
Apple has significantly outperformed the market over the year: 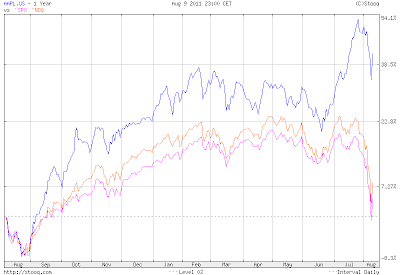 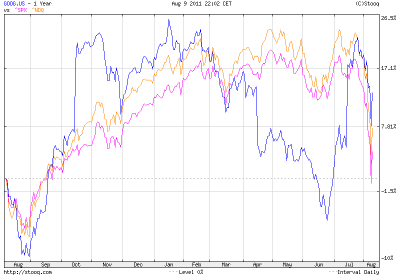 Source: stooq.com
I'm not sure whether Google+ will become success Google would like it to be. I do not know whether Google has any more aces in his sleeve to show over the next 12-24 months. However, there is a high probability that Apple's has overrun the market or is very close to it.
Hence I'd like to propose another experiment: shorting Apple against the market, i.e. Nasdaq futures. Probably the best moment would be on the day of the release of iPhone 5.
But let's check the strategy performance before that day:
Posted by mjaniec at 8:23 AM
Email ThisBlogThis!Share to TwitterShare to FacebookShare to Pinterest