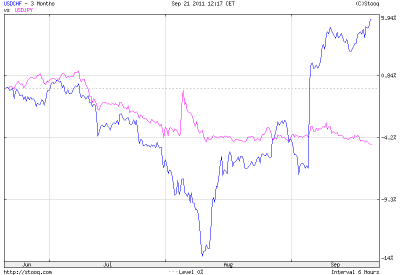 Back in August, Bank of Japan intervened in USDJPY. As a result, the Japanese yen felt by nearly 3%. For a single day...

A few days later, the Swiss National Bank's intervention followed. EURCHF shot up by nearly 6%. Supported by gossip about further actions, the franc continued to weaken for a number of days,  till the beginning of September, when the fear of another SNB interventions waned.

Then SNB stroke again and pushed EURCHF by another 9% in one day. Just as declared, the Swiss bank has remained determined to defend the 1.2000 level by all means.

So far, SNB's actions demonstrate that central bank is able to successfully intervene in the forex market if only it plays on the right sight of the market (selling UNLIMITED locally currency as opposite to selling limited foreign reserves) and is determined enough to stick to its pledge.

In the meantime, the Japanese play a strange game. They declare intervention, spend quite substantial amount of money on a single action and... back away.

As a result, USDJPY is more than 8% down since a year ago, when BoJ started its recent wave of the interventions.

Most recently, the decreased volatility in USDJPY suggested that BoJ may be intervening in the market in more subtle and effective way in order to defend the 76.00 line.

As USDJPY has just resumed its march down, and currently is less than 0.5% above the imaginary Maginot Line, the day of the test of the BoJ's resolve is coming...

Posted by mjaniec at 12:53 PM
Email ThisBlogThis!Share to TwitterShare to FacebookShare to Pinterest

I advise that you trade with the highest ranking Forex broker.