The end of floating exchange rates is coming?

During the weekend's G7 finance ministers' meeting, Japan was probing participants about possible new forex intervention and didn't meet with any significant objections.

Japans was trying to stop the strengthening of its currency without success for some time now.

However, the recent action by the Swiss National Bank has suggested a new, potentially more fruitful approach.

With inflation at 0.2% (identical to the Swiss'), Japan shouldn't be worrying about dangers connected with "printing" empty money.

Should we expect then another declaration of providing UNLIMTED funds by one more central bank, soon?

Even more interesting question is, how the other major central banks - such as Fed and ECB - will react to another ultimate intervention.

Many studies in the past concluded that interventions are ineffective.

But take a look on the performance of Chinese yuan (renminbi) versus US dollar over the last five years (blue line in the center of the chart): 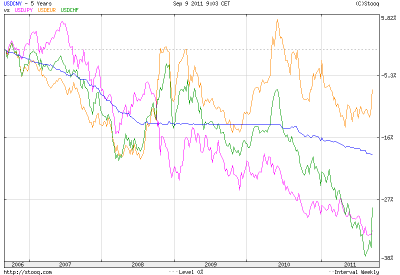 It's true that yuan is a controlled currency, which value is basically set by the Chinese central bank, and its availability is limited to foreigners.

The famous Black Wednesday of September 16th, 1992 demonstrated that single central bank is not able to defend the value of currency, especially when operating under certain exchange regime, for limited size of its foreign reserves.

Nevertheless, there are at least two situations when central bank cannot lose:

In the previous years, we were witnesses to various central banks' decisive actions:

In the coming days, we can see ultimate intervention in USDJPY by BoJ.

All these moves give rise to fears about the possibility of  "currency wars". Paradoxically, what we can see instead is closer cooperation between central banks and more regulation of the forex market.

Germany and France keep pushing for introduction of the financial transaction tax (Tobin tax), which should cover forex. Most probably it will limit the volume of the currency transactions and possibly reduce volatility.

Being the most liquid of the financial markets, forex is not an easy place for arbitrageurs. Introduction of the new market mechanisms can disturb this balance and create new interesting opportunities.

Posted by mjaniec at 6:19 PM
Email ThisBlogThis!Share to TwitterShare to FacebookShare to Pinterest

The Forex trading sign can be a advice intended for entering any buy and sell using a currency exchange pair, generally in a distinct value in addition to occasion.

I would suggest that you stick with the ultimate Forex broker.