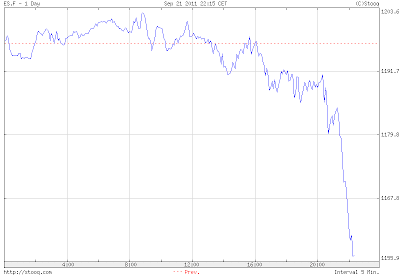 
As anticipated, Fed has announced the "Operation Twist" today. The declared scale of the operation is a little larger than anticipated. And as a result markets have sunk by 3%... (still, -2.94% is better than
-6.66% ;)

Is it really so strange that FOMC confirms there is a culminating problem in Europe, or is there something more?

Since reading even a pretty short FOMC statement is not so easy when markets are reacting aggressively in the real time, many people probably haven't noticed yet a number of slightly positive changes in the wording:


It seems, Fed has observed some weak signals of the improvements in the economic conditions. The economy is still very fragile, especially the labor market. There is also a significant risk that - when realized - can have a tremendous impact of financial markets.

Probably what has been missing in  the FOMC statement is some kind of declaration that Fed is monitoring the situation and is willing and able to act in case of negative developments. Unless there is nothing Fed can do to mitigate this particular risk and market reaction is correct?


Meanwhile, USDJPY has managed to bounce back from the previously mentioned 76.00 defense level. Will see how long it will last... 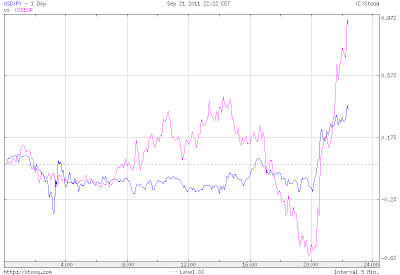 Posted by mjaniec at 10:41 PM
Email ThisBlogThis!Share to TwitterShare to FacebookShare to Pinterest