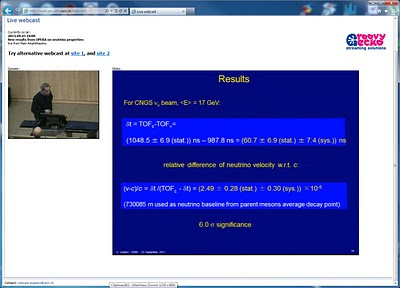 Over the last nearly three years researches at CERN have been observing some interesting discrepancies in time it takes neutrinos to travel between laboratories in Switzerland and Italy.

Even though the physicists at CERN spent significant time on verification of their surprising measurements, its too early to declare the result definitive. It definitely requires verification at other laboratories.

But if it is confirmed, this tiny rift can transform into huge hole in the contemporary physics.

BTW: In 2008, researches from Fermilab published results of their MINOS experiment, in which the speed of neutrinos was measured at +0.000051, or 299,807.3 - 15 kilometers per second larger than c. However, the possible error was much higher than in the case of OPERA in CERN.

Posted by mjaniec at 5:19 PM
Email ThisBlogThis!Share to TwitterShare to FacebookShare to Pinterest