Commerzbank jumps, but will it last? 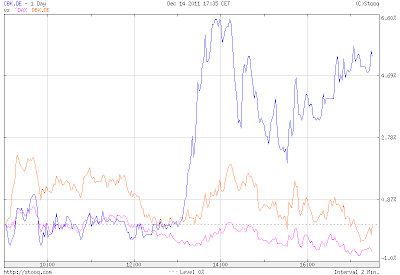 Commerzbank's shares jumped by more than 5% today on news of  the reactivation of the German bank rescue fund and some increase in the planned purchases of highly discounted hybrid securities by the bank.

According to Financial Times:

Officials in Berlin are privately sceptical that Commerzbank can keep to its pledge to shore up its capital without using more state funds.

The rescue fund, could allow Commerzbank to get rid of its Eurohypo division. However:

Chintan Joshi, analyst at Nomura, said that transferring bonds to the government at above market value would be a “straight bail-out” and therefore unlikely. “We do believe that a bail-out will come with pain attached ... we do not think Germany can provide a lucrative bail-out to Commerzbank in the current climate,”

On the downside, selling these assets to the SoFFin would come at the expense of hefty write-offs as they would have to be transferred at lower market values.

And this leads us to (FT again):

Officials in Berlin are privately sceptical that Commerzbank can keep to its pledge to shore up its capital without using more state funds.


Among the measures in the bill are provisions for BaFin, Germany’s financial regulator, to force banks to accept state help if it thinks a bank’s plans to raise capital are insufficient.

According to EBA, Commerzbank need 5.3 billion EUR of fresh capital. It's current market cap is 6.28 billion EUR. It can get some 700 million EUR from the purchases of the hybrid debt. Some more from savings.

Let's assume, the state bail-out will inject "only" 3 billion EUR of the fresh equity. It would mean, that the current shareholders would be diluted by some 66%.

Under such scenario the price of Commerzbank shares can quite easily go under 1 EUR.

Posted by mjaniec at 9:38 PM
Email ThisBlogThis!Share to TwitterShare to FacebookShare to Pinterest