2011 was definitelly a bad year for many hedge funds. The Paulson Advantage Plus fund managed by John Paulson who had made a killing during the recent sub prime crisis, lost more than 50% this year.

The Polish "near hedge funds", such as Investor FIZ and Opera FIZ didn't fare much better. But the worst part is their performance this year was highly correlated with the market :( 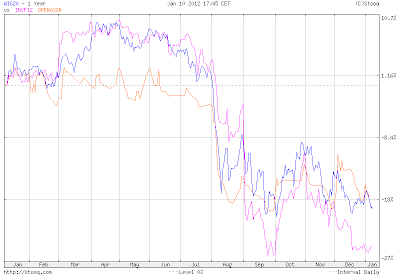 Decoupling was demonstrated by small funds like Opera Alfa-Plus and Gandalf SFIO, but that allowed only for capital preservation instead of accumulation. Opera Alfa-Plus finished the year just 1.24% higher, while Gandalf returned 3.75% (January 4th, 2010 - January 3rd, 2011).

Meanwhile quantitative SuperFund lost -20.2% (SuperFund A SFIO PLN) to conclude its six years of presence on the Polish market more than 22% under the water...

Especially when they also have problems with beating the market in good times.

Posted by mjaniec at 8:25 PM
Email ThisBlogThis!Share to TwitterShare to FacebookShare to Pinterest