I have mentioned recently the Facebook's IPO preparations and its desire to sell its share at the $100 billion valuation.

A little later I have read an interesting analysis of the Facebook valuation based on the logistic growth model fitting by Peter Cauwels and Didier Sornette.

Taking this opportunity, I decided to test a brute force logistic model fitting to the actual data, using both simulated annealing and differential evolution optimization methods as implemented in R.

The results of such an approach are a little but not substantially different from the Cauwels-Sornette approach, at least in the differential evaluation case: 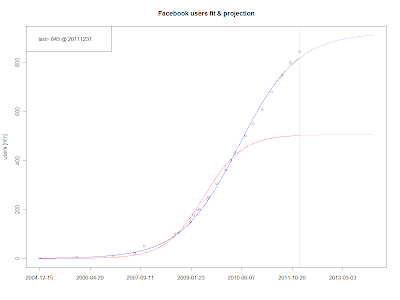 Posted by mjaniec at 7:22 AM
Email ThisBlogThis!Share to TwitterShare to FacebookShare to Pinterest