George Soros described the Boom-Bust Model in his book "The New Paradigm for Financial Markets" (pg. 65-66) published in 2008: 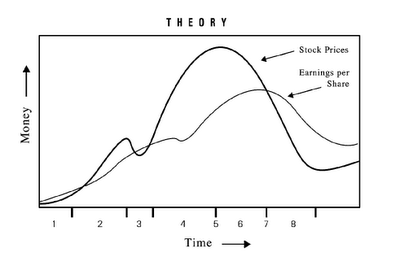 The model consists of seven phases:

In the initial stage (1) the trend is not yet recognized.

Then comes the period of acceleration (2), when the trend is recognized and reinforced by the prevailing bias. That is when the process approaches the far-from-equilibrium territory.

A period of testing (3) may intervene when prices suffer a setback.

If the bias and trend survive the testing, both emerge stronger than ever, and far-from-equilibrium conditions, in which the normal rules no longer apply, become firmly established (4).

Eventually there comes a moment of truth (5), when reality can no longer sustain the exagerated expectations, followed by a twilight period (6), when people continue to play the game although they no longer believe in it.

Eventually a crossover point (7) is reached, when the trend turns down and the bias is reversed, which leads to catastrophic downward acceleration (8), commonly known as the crash.

It is quite possible that we are currently experiencing the late stage of phase four of Soros' model, i.e. severe detachment of Apple share price from the equilibrium conditions, which culminates in the peak of the cycle, followed by accelerating decline: 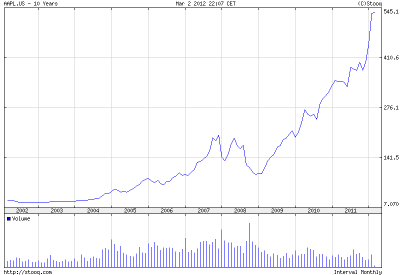 It seems that the growing trend in Apple shares was successfully tested at the turn of 2008 and 2009, and accelerated significantly according to the model, to enter the current far-from-equilibrium territory.

There are no limits to Apple growth, right?
I'm currently betting the opposite.

I'm fully aware that the Soros' model may be wrong or inadequate for the Apple's situation. I also realize that prices in the far-from-equilibrium area do not follow any strict rules. Hence, there is a high risk in going against the prevailing bias.

The Apple share prices can still go significantly higher. As John Maynard Keynes said "markets can stay irrational longer than you can stay solvent". But they simply cannot go up forever.

Posted by mjaniec at 8:27 PM
Email ThisBlogThis!Share to TwitterShare to FacebookShare to Pinterest