Are the new iPad sales slowing? 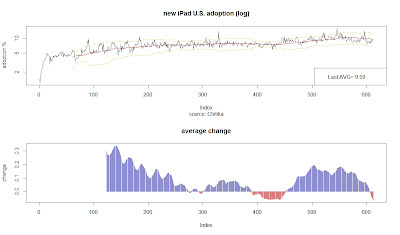 The 3rd generation iPad was released on March 16th, 2012. Apple announced that it sold 3 million units of its new tablet in the first weekend since launch (although it is not clear whether this number includes global or U.S. sales only).

Chitika, an online ad network company monitors the U.S. adoption of the new iPad, based on the number of ad impressions in its ad network assigned to various device types.

After the first weekend, when Apple announced it sold 3 million new iPads, the U.S. adoption rate according to Chittika stood at 5.358%:

Nevertheless, as you can see on the first chart, it seems the growth dynamics may be slowing down or flattening.

This may be connected with a number of technical problems that haunt the new Apple's device, including:
[ R code ]