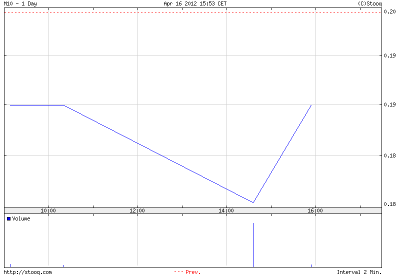 A couple of days ago, I mentioned a strange price action on M10, a small company developing automated trading systems listed on the NewConnect market.

Today I'm revisiting the company, to show how the price movements correspond with the changes in Level-1 order book for this stock: 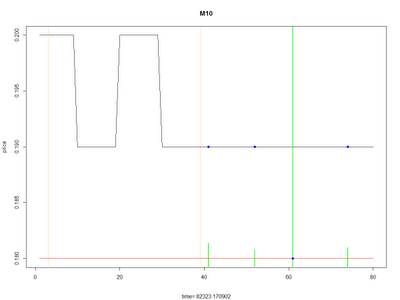 It's quite an interesting and very easy to show example for a tiny number of transactions. Actually only 4 (say: four) transaction points were recorded yesterday :)

After the opening of the cash markets, the bid and ask levels were unchanged during the whole trading session - at 0.18 and 0.19 respectively.

The majority of transactions (3 out of 4) were fulfilled at the higher ask level of 0.19, while one touched the lower bid level of 0.18.

Actually, this single bid-level transaction represented the great majority of the turnover. If not for a much smaller later transaction at the higher price level, the company would have finished day not -5.00% but -10.00% lower...

Even more interesting is the case of Comarch: 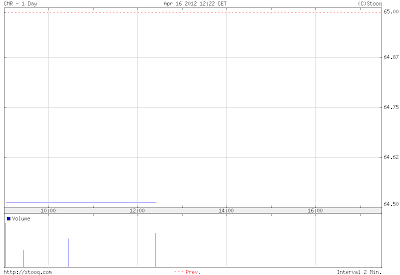 Ostensibly, apart from the relatively small (-0.77%) drop at the opening, there was virtually no movement in the stock.

However, the investigation of the Level-1 order book unveils some vitality: 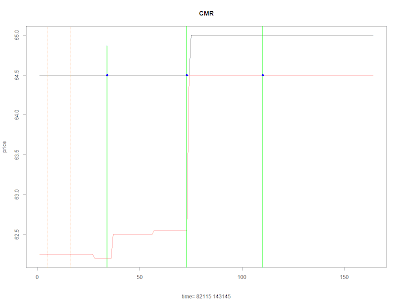 It does not mean though, that the whole Polish stock market is dead: 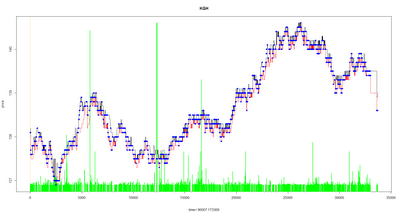 Posted by mjaniec at 7:15 AM
Email ThisBlogThis!Share to TwitterShare to FacebookShare to Pinterest

I would suggest that you stick with the most recommended Forex broker: AvaTrade.