It says what is a minimum amount of money that can be lost over a certain period at a given probability level, based on the historical returns.

The first important thing about VaR is that it specifies only a minimum amount that can be lost. Hence, virtually any larger loss is possible.

To take this limitation into account, a related measure called Conditional VaR or Expected Shortfall is used.

Conditional VaR says, what is the expected (i.e. average) loss in case the return is among a certain portion (such as 1% or 5%) of the worst historical cases. Therefore CVaR combines both VaR at a certain level and all worst cases, weighted by their probability of occurrence.

Below chart show density of normally distributed returns together with 5% and 1% VaR and CVaR values. 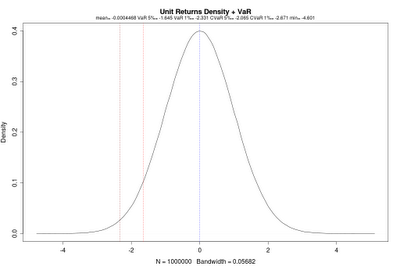 Chart: ND Returns Density together with VaR and CVaR

There is however one serious problem with both VaR and CVaR I'm going to address in the next post.

Posted by mjaniec at 3:15 PM
Email ThisBlogThis!Share to TwitterShare to FacebookShare to Pinterest