Testing the significancy of correlations on the financial markets


The current one year EURPLN - USDPLN daily changes correlation is at amazing 0.9024.

And I'm not talking about the nominal values of these currency crosses, but about their daily changes, which in aggregate seem to apparently resemble random walk: 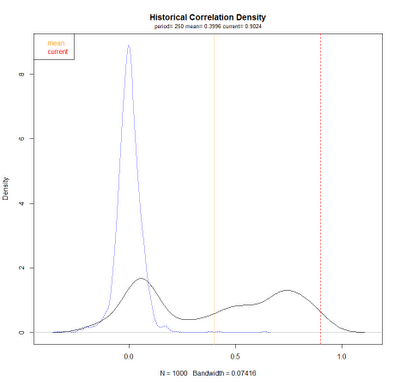 Meanwhile, the historical average correlations over 250 days is 0.3996 for them - still pretty high, but far from the current level.

The historical correlation mean is at the far right of the simulated correlation based on the stable distribution fitted to the changes of these currency crosses, and pretty much above the theoretical correlations based on N(0,1) changes. 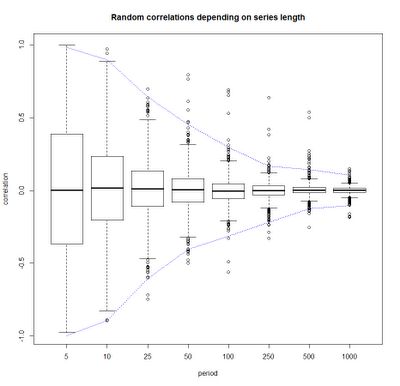 Fig. Theoretical correlations based on fitted stable distribution to EURPLN and USDPLN changes,
as well as N(0,1) distributions

Still, the current level of the correlation between these two currencies may be an outlier for the historical distribution of the n=250 correlation is rather flat, i.e. pretty uninformative.

You can find some other assets with much more stronger correlations, though,

Take for an example two companies listed on the Warsaw Stock Exchange: PKO and PEO.

Their current one year correlation is 0.7366. While this is still a little over the average of 0.6705, the historical distribution of correlations points to a stable and strong relation between these companies: 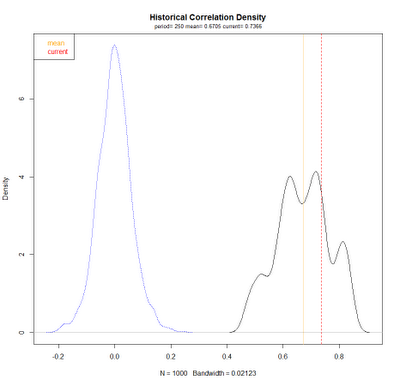 On the basis of the analysis of correlations of random data, you can clearly say, that the relation between PKO and PEO is hardly an accident: 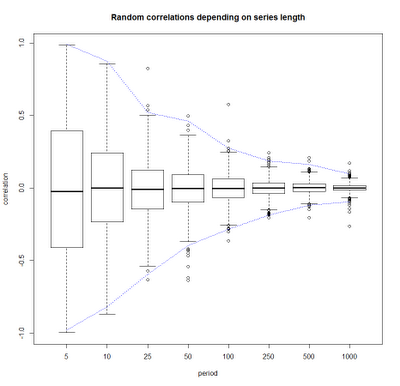 Fig. Theoretical correlations based on fitted stable distribution to PKO and PEO changes,
as well as N(0,1) distributions

The strong connection between PKO and PEO is additionally confirmed by their cross correlation: 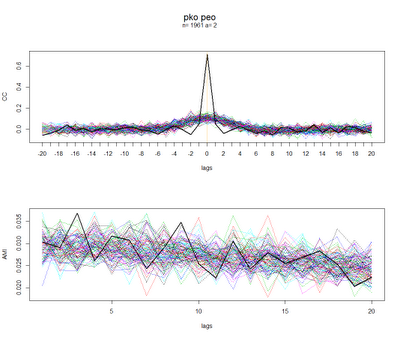 Fig. Crosscorrelation and Average Mutual Information for PKO and PEO

Nevertheless, predicting market movements with correlation, may not be an easy task...


Posted by mjaniec at 2:18 PM
Email ThisBlogThis!Share to TwitterShare to FacebookShare to Pinterest