Eurogeddon - or how NOT to play Black Swans

In February this year a new fund aiming at the collapse of the EU was launched. The founders of the fund called Eurogeddon claimed 150%+ returns if the assumed scenario comes true.

After some 9 months, the actual fund performance is totally different from what was promised. The fund is 36,4% down since February 22, 2012. And chances of recovering from this drawdown are remote. 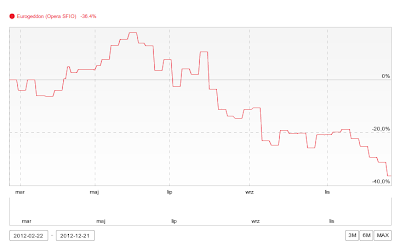 I don't intend to discuss whether the investment theme (i.e. collapse of the EU) was right or not. Also, I do not plan to dispute the idea of launching a fund targeting ECB's unwillingness to support the Eurozone in critical situation.

As George Soros demonstrated in 1992 it is possible to successfully bet against a major central bank, but only if you are on the right side of the trade...

Instead I would like to focus on two key design flaws in construction of Eurogeddon.

1. using futures instead of options and CDS

Eurogeddon strategy was implemented mostly through purchases of symmetric futures contracts - index futures, currency futures and bond futures. Hence, the fund was (and still is) fully exposed to developments contrary to its assumed scenario.

Nassim Taleb, the person who coined the term Black Swan, recommended Black Swan-type strategies to be implemented using a portfolio consisting of mostly secure bonds, supplemented by a small portion allocated in out-of-the money options adequate to a given low probability scenario (or scenarios... - see next point).

Taleb's recommended implementation significantly reduces the risk of a adverse scenario development for potential loses are limited to premiums paid for the options. In addition, some of the premium should be covered by interest paid by the bonds.

In addition, unlike typical Black Swan funds, like Universa or Pine River, Eurogeddon bet everything on a single scenario. Hence, if such assumed scenario does not materialize, Eurogeddon had nothing else it could benefit from.

Most low probability high impact funds try to play numerous different scenarios. Sometimes they bet on contrary large developments in one particular area (i.e. possibility of huge decrease or huge increase in a price of some asset). They do not know which scenario will come true. They just want some of them to materialize over time.

There is a need for Black Swan type funds, but Eurogeddon is simply an inadequate vehicle.

I'm convinced there is a need for more Black Swan type funds. Unfortunately the construction proposed by the founders of Eurogeddon is incorrect.

Yes, there was a slight chance that the fund may bring substantial gains if the single scenario on which the fund was based comes true.

But the expected return based on the probability of the event and risk connected with the selected implementation employing symmetric instrument was too low. Even negative :(

I hope, the Eurogeddon story will not discourage people from Black Swan type funds. And I wish somebody launches a new better designed fund of this type.

Posted by mjaniec at 9:27 AM
Email ThisBlogThis!Share to TwitterShare to FacebookShare to Pinterest