Screeming sell on FTSE or...?

There are mixed opinions about it - some people highly recommend it, while the others consider it pure voodo (read comments under the article).

Frankly speaking I also have problems believing it may work at all. Why turning points must appear after exactly 9 consecutive price moves, every time? Why not 8 or 13 (13 is another magic number used for exhaustion sequence)? Should we consider daily, weekly or hourly price bars when calculating the indicator?

The idea of TD Sequential came from studying Fibonacci numbers. Initially two numbers were considered: 8 and 13. However after some experiments, DeMark chose a non-Fibbonacii number 9 for its indicator. There is no explanation for this decision. Actually Tom DeMark declared that he didn't know why his system may work. "Ask God." was his answer.

To put the TD Sequential to a little test I implement it in R. I'm aware that my implementation may not be fully accurate, for some aspects of the indicator were not clear in the reference materials I had used. I may also be wrongly interpreting the indicator (I mostly use the Setup sequence). Above all, a test conducted on a single asset and over one period is definitely not exhaustive.

OK, after I made a disclaimer, let's do some work.

In connection with the issue mentioned in my previous post, I selected the FTSE index of the London Stock Exchange as the subject of my experiment. 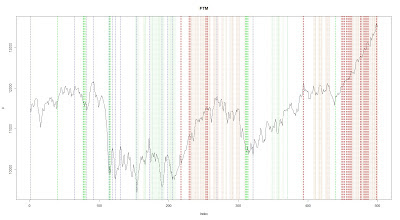 Meanwhile its record for predicting peaks is mixed to disappointing. Probably the best signal was given in September 2012. Three earlier signals - in January (x2) and February 2012 - were followed just by minor pull backs. It also missed  a substantial peak in mid 2011.

The real problems started in December 2012 when TD Sequential started screaming SELL! And it continues to do so till now - nearly +12% later (BTW: Tom's January prediction regarding the peak in S&P500 were incorrect so far - see links at the end of the post).

Still, its pretty amazing that TD Sequential was able to point out many of the local extremes. And the differences in detecting troughs and peaks does not surprises me. The Extremum Detection System I'm currently working on, still has the same problem - it is pretty good at marking troughs, but it often fails when dealing with overbought levels. Fortunately it conveniently informs about this asymmetry in fit levels: 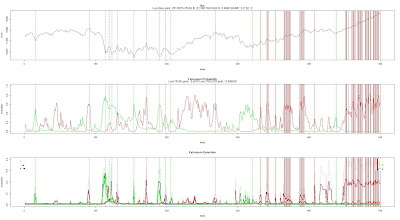 Read more about the TD Sequenatial from Tom DeMark itself:
http://forex-strategies-revealed.com/files/pictures_strategies/downloads/TD_SEQUENTIAL.pdf

Posted by mjaniec at 1:21 PM
Email ThisBlogThis!Share to TwitterShare to FacebookShare to Pinterest

I would like to advise that you go with the most recommended Forex broker: eToro.