The recent turmoil in Cyprus seems to accelerated the rapid increase in value of virtual currency Bitcoin.

As a result, the price of mtgoxUSD, the Bitcoin denominated in USD and traded on mtgox, increased by 85% between March 1st and March 26th. 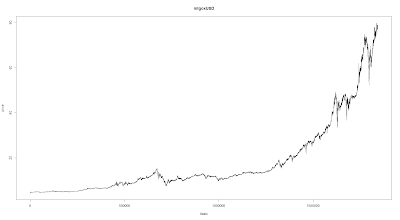 The annual volume of mtgoxUSD reached 267 million USD (in the meantime, the turnover of mtgoxEUR approached 17 million EUR).

Since mtgoxUSD should equal mtgoxEUR * EURUSD, this raises the question, whether is it possible to find an arbitrage opportunity between these three assets, similar to the one between EURJPY, EURUSD and USDJPY, described in September 2010.

I wasn't able to find adequate information about historical BTC spreads, but based on the EOD data for mtgoxUSD, mtgoxEUR and EURUSD, it seems there may exists pretty consistent difference that may be exploited: 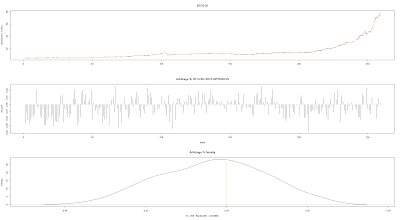 Over the previous year, the differences between mtgoxUSD and mtgoxEUR*EURUSD fluctuated between -4% and +4%, creating potential arbitrage opportunity.

To verify this preliminary observation, one should use historical intraday BTC spreads and EURUSD data.

Some additional information on bitcoin: https://pinboard.in/u:mjaniec/t:bitcoin/

Posted by mjaniec at 8:18 PM
Email ThisBlogThis!Share to TwitterShare to FacebookShare to Pinterest 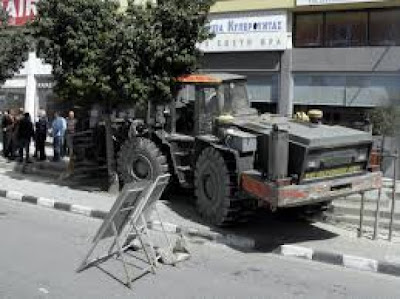 Fot. Buldozer parked in front of the bank in Cyprus

EU and IMF announced their bail-out package for Cyprus on Saturday.

According to its terms, up to 9.9% of the deposits held by Cypriot banks will be forcefully converted into banks equity. To prevent bank runs, all the funds were frozen and electronic transfers blocked till banks open on Tuesday. No wonder this caused a swift and very nervous reaction of the people in Cyprus.

Cyprus may be a tiny country on the outskirts of the European Union. Hardly anyone should care about what's going on there, right?

First of all, the confiscation of the part of money held by people in banks is a violation of the deposit guarantees introduced in the EU in the wake of the financial crisis. If the guarantee was broken in Cyprus once why it cannot be broken in other EU country, again? Why to confiscate (sorry, forcibly convert to illiquid assets) only 10% of the deposits and not 25% or more? Meanwhile the EU-wide guarantee was shelved in September 2012 under German pressure. Trust in the Eurozone banks has just been seriously shaken.

Second, there are more then 100 brokerages operating from Cyprus. Even that some of them keep their clients' money outside the island, others don't. Since many of these brokerages provide FX, CFD and commodities trading, they encourage high leverage. A 10% haircut on your margin may be very painful. Some margin calls are to be expected and some leveraged positions may be rapidly unwinded. The actual effect may be much stronger than directly assumed from the nominal size of the margins. Even if you are not forced to close your positions, you will very seriously consider changing your broker and moving funds out of Cyprus and any broker that keeps funds in the Eurozone.


Third, it is believed that some 50% of the deposits in the Cypriot banks belong to the wealthy Russians. Most probably not only to the Russians, but also citizens and businesses from other Eastern European countries willing to optimize their tax burden and reluctant to share information about their assets with their home fiscal authorities. Even that they are unable to save the 10% taken by the EU and IMF, they've already started to think hardly about where to relocated the rest of their money. The farther from the EU the better is my guess. The Singapore or the Middle East may be interesting candidates. For the Switzerland turned recently too vulnerable to the EU-USA pressure.
Posted by mjaniec at 8:54 AM
Email ThisBlogThis!Share to TwitterShare to FacebookShare to Pinterest

We do not lose money

From the Michael Covel's book on trend following one can come to conclusion that trend followers do not generate loses. They only experience some temporary drawdowns....

Sometimes some of these "drawdowns" can strangely turn into catastrophic blowouts that wipe out trend follower's fund. Shit happens even to the wizards of trend following, it seems...

But how it is possible that trend followers experience major drawdowns at all using tight stop-losses in the range of a couple of percentage points?
(my colleague suggested that these drawdowns are in fact results of numerous exists caused by stop-losses from incorrectly identified trends)

Still, at least the trend followers apparently have some plan and discipline many of the other monkeys are lacking.

Posted by mjaniec at 8:20 PM
Email ThisBlogThis!Share to TwitterShare to FacebookShare to Pinterest