Creatively using statistics for your advantage

As I have posted yesterday, the Polish government is trying to shake up the social security system to save the budget. Largely in a Hungarian way.

I would like to stress that I am not completely happy about the way the Polish private pension system operates. Much can and should be changed.

Nevertheless, the currently proposed "reform" is mostly a cash grab.

The government claims, that the private pension funds are expensive for they collected close to 17 billion PLN (*) in fees. 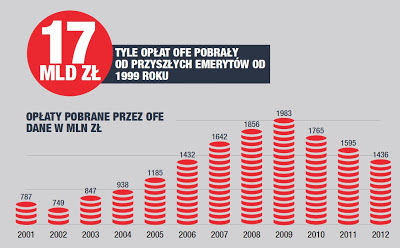 First, these fees were sanctioned by the Polish government.

Second, it is worth comparing these 17 billion PLN (*) to 43,7 billion PLN cost of the public social security system - ZUS - over the same period.

If you compare the costs of the public social security system to the assets of the private funds, you may be surprised that the former constitutes as much as 17% of the later.

Hence, one can "infer" that it is possible to save some 45 billion PLN over 10 years by liquidating ZUS ;)

I agree, that these comparisons and conclusions are a little bit "too creative", but similarly inventive are some of the juxtapositions and proposals presented by the Polish government.

Not that the government is the first or the only entity using statistics creatively...

(*)  maybe my spreadsheet software has some bugs, but when it sums up the OFE fees presented by the government, I get a little more than 16 billion PLN not 17 billion PLN; but what is a billion among the friends...

Posted by mjaniec at 7:58 AM
Email ThisBlogThis!Share to TwitterShare to FacebookShare to Pinterest

The Polish government's recently presented plans to "encourage" people to completely move away from the private pension funds (so called OFE) introduced in 1999, to the state social security system ZUS.

I would definitely agree, that OFE are not perfect retirement saving solution. They are too expensive (they take too high management fees) and they are seriously limited in ways they can invest their assets - mostly in government bonds. In connection with the government-sanctioned benchmarking system, they chase the same investment strategies, which is clearly visible in the very high correlation between the funds.

Nevertheless, their overall performance over the 14 years they have operated is not so bad. As for late June 2013, their average annualized return is around 9%. 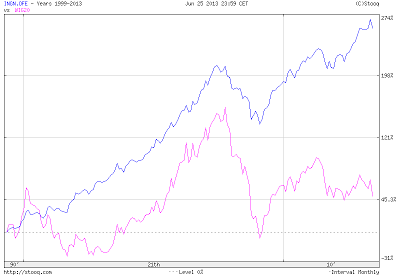 Yes, the private part of the Polish retirement system requires some changes. But the current government proposal is simply bad.

It was designed as a way to prevent budget from exploding due to the rapidly raising deficit. It most probably will give the Finance Minister some relief.

But it will not solve the problems in the slowly dying social security system.

Poland is not the only country facing similar challenges. Take a look on Japan...


Posted by mjaniec at 10:25 AM
Email ThisBlogThis!Share to TwitterShare to FacebookShare to Pinterest