F# - even the longest journey begins with a single step. And there may be bumps along the way

Don't take me wrong. I have just started familiarizing myself with F# - a fairly new functional programming language developed with heavy involvement of Microsoft.

My intention has been to examine, whether F# can be used for various tasks I usually perform with R (http://www.r-project.org/).

It is different in many ways from standard programming languages like C/C+. It is also different from R.

Learning it seems like solving a series of logic puzzles, at this stage.

My (very early) F# code is definitely not optimal, but it may give a hint of what may come later.

Take for example a simple function for calculating return on investment in a bond, used in my previous post.

You can see the code in context here: http://pastebin.com/bFEHQQnM

Meanwhile, my F# equivalent is: 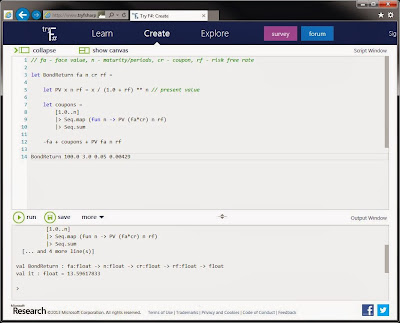 At least both functions return the same result :)

The nice thing about F# is that, although Microsoft did not include it in the free Visual Studio Express 2013, there is an online version of the F# available. You can write and test your F# code there.

OK, why F# may look strange? Just a couple of observations:
I would like to stress again, that I am at the very beginning of my journey with F#.

The peculiarities of F# have not discouraged me so far. I'd say, it is quite the opposite. They have increased my hunger for learning fore about this bizarre creature ;)

Posted by mjaniec at 8:14 PM
Email ThisBlogThis!Share to TwitterShare to FacebookShare to Pinterest